This section allows you to view all posts made by this member. Note that you can only see posts made in areas you currently have access to.

Happy to batch into years so you can read up on the hat your bike was like new in decent mags before they all became comics.

Not posting them it would cost a fortune.

We have shared some great times and there isn't any trail I am not prepared to throw it at.

Everyone I know who has owned a DR350 regrets selling it, including the bloke I bought it from. 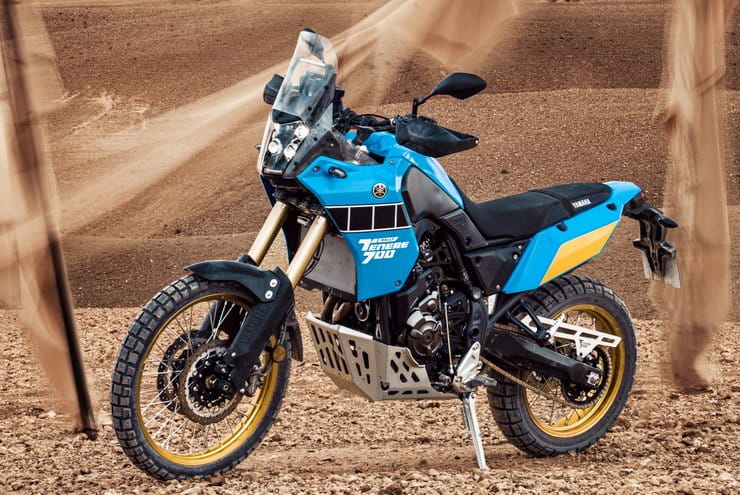 I have the requisite permission slip from the mrs to make the change but I have to let the DR go if I want the T7.

On the plus side the T7 will give me a much greater range than the DR as it is so much better on the road sections but it is also a peach off road albeit heavier but more powerful.

Also I can actually buy accessories for the T7 cos its new and people are making stuff for it whereas I have struggled to buy parts for the DR.

Also Dan, who I ride with most has a KTM 790S so I know these larger bikes are more than capable of tackling the trails we ride.

On the down side its a lot of money to throw in a muddy Welsh ditch and I can see myself being precious about it.

Also there is not a lot of second hand ones about and they are going for strong money.

Also I can spanner the DR myself and it takes minimal maintenance.

Final decision is a bit of a way off due to the house move and needing to be sure we are financially OK after that.

Target date is getting a T7 for my birthday next year.

Every time I think I have made up my mind something comes along to change it. Most recently I rode the DR to Dartmoor and back, it did everything, maybe not as well on the road as Dan's KTM 790 but certainly good enough and I get emotionally attached to bikes so usually have to write them off rather than sell them.

Hefty parts prices are in danger of killing my old girl off for good.

Misc For Sale / B&B on the Isle of Wight

Details on her all new website but please ring or email any booking requests.

Feel free to mention my name for an extra sausage with your full English.

Now I seem to recall that a few of you have enjoyed luggage disasters on your travels.

My question is this - how much clearance does a hot exhaust need before the luggage is safe?

I mean as log as its not touching, is that OK?

I reckon I can give it a decent gap and will be knocking up an extra heat shield with some sheet aluminium but I have an area where there will be luggage 3-4" above the exhaust with no protection.

If its a non runner I will look at other options.

Ideally an iPhone of some description as I am technically illiterate and they are simple.

Very limited budget £75 or so.

Any of you got something kicking about in a draw somewhere?

Bike Talk / The bike that started it all....

Which one did you have?

Shamelessly stolen from Jarse cos this is its spiritual home not Bookface.

Dan sold his so if anyone else is getting an upgrade and selling please let me know. PJ / Millhouse I am looking in your general must-have-the-latest direction.

Mechanical / Save a Snotter Resurrection

Being unable to leave anything alone I found some street fighter style options for it and have set about resurrecting the min beast for my other sins to ride to college etc.

Today momentously it started and ran!

It does pop and bang on the over-run quite severely. Anyone able to give me a reason for this?

It does have a scuffed Arrow can on it and has improved since I put a new rivet a hole in that but still more than I would like.

Further investigation shows it is missing the bit that holds the brake block.

Went to the local tip but the pikeys had all the bikes cos they were "sold" so no joy there and eBay seems to be listing anything like this as "vintage" with a price tag to match.

Thought they may be of interest to anyone looking for something to commute on or the basis for a Cafe Racer project.

Any offers considered, they have to go.

Bikes are in Poole.

Looking at Google images gives you some idea what you could make with them. Not my bikes, I take no responsibility for any rash purchase or subsequent failure to complete your Cafe Racer project.

Personally, I am firing up the mighty DR and taking to the green roads of Dorset with Chojin to test out his new ride.

Then trying to find MotoGP coverage on normal TV due to giving up my BT Sport subscription as part of austerity driven cost saving measures.

Mechanical / Stupid brake question before I do something stupid

January 18, 2016, 01:56:14 PM
Just cleaning/servicing my brake calipers on the trusty DR and the crush washer at the line has pretty much bonded with the body of the caliper.

I can't shift it so I am thinking I am left with three choices.

1.  Leave it as is fit a new crush washer on the other side of the banjo and hope for the best.

2.  Fit a new crush washer to both sides of the banjo meaning the caliper side has two in the hope that the new washer will make up for any deficiencies in the old one.

3.  Just hack away at it until the old one comes off. Heat/cold etc.

Not keen on 3. due to how much it has bonded, reckon 1. would be OK probably, would rather do 2. but think this could be worse than 1.

Anyone upgrading who would rather sell it to me than send it to Mazuma or some such?
16

Bike Talk / Good use of a Tuesday evening

All a bit last minute I decided to grab the mighty DR and head out to explore some new lanes with Sir Chojin of Rownhamshire yesterday evening.

In all honesty more time was spent navigating than I would have liked but we did find some fun new places to ride.

Highlight of the evening was finding that one of the lanes contained a table top style jump where another track crosses it. Any video evidence currently circulating on Facebook of me completely mincing out of attempting it should ignored or followed by the question "Where was your attempt Dan?".

To be fair coming along a dark overgrown lane it just looked like a 3 foot high wall.

Left Chojin at the A30 and headed back via Salisbury before deciding it was too early to go home and going for a couple more lanes on my own.

Lessons learned - It gets dark quicker than you think, DR lights are shit, it gets cold when it gets dark, MX pyjamas offer no sort of warmth.

Anyway it was top fun and to celebrate I dropped the DR in the garage and borked my shoulder trying to catch it. Arse.
17

Bike Talk / Your day can always be improved....

For those that know him Beer Chucker popped over tonight on a work related matter, on his ZXR750.

So quick jacket and helmet grab later and we head out for a quick try out of each others ride. Found him a lane to try the mighty DR then hopped on the ZXR and pasted a cheesy grin across my chops.

My god it hurt my wrists and proved why I should not be on a sports bike on the road but it did tickle me.
18

Always had sealed batteries before so this is new to me and the instructions are sparse.

They mention something about opening a degassing valve before adding the acid. I have not a Scooby what that means.

Sure it is simpe but can anyone offer some guidance.
19

Arranged to meet a mate and some people he knows for a ride out this morning only for him to go out on the piss last night and bailing on me this morning. So here I am at Crescent ready for the off with all my friends...

I was a bit nervous of tackling the section from the Heavy Horse Centre over to Cranborne on my own so planned a road route round it, then I put on my big boy trousers and just went for it, at worst I would drop it in the river and have to push it a mile or so to the nearest road before trying to get the missus to pick me up. As it was the mud was worse than I remembered it but the river was lower and I chugged through with no dramas feeling chuffed with myself.

Due to the delayed start to my green laning career I have had plenty of time to study the maps so had no navigational issues taking the road less travelled by, except for a temporary traffic order at the other end stopping me linking up some trails.

Ploughed through a very rutted trail north of the A354 onto the more open plain, just me and three surprised deer who ran a wide circle around me then jumped the fence before disappearing over the hill. Also had company from a buzzard, a fox, squirrels, rabbits, chickens, loads of pheasants and a recently deceased badger (no idea what happened to him, no way anyone ran him over where I found him). Starting to wish I had brought a drink at this point.

Rode on up to Salisbury Racecourse which was my target for the day as I only had the morning.

Turned for home, minor directional issues finding the ford at Stratford Tony which I then bottled out of riding. Have to say the trail up from there was much much harder than I remembered but I made it, which was more than the badger did. Found some old boundary stones, one from the 1800's one even older, which had been uncovered when the brambles had been cut back, made four of us old relics out enjoying the countryside. Considering sipping a puddle or trying some petrol at this point.

Made it home and had her washed and changed out of my kit bang on the time I said I would be back, unusually. Bit stiff in the shoulders due to death grip on the handlebars for far too much of the ride.

In short, you don't need the latest hot shit tackle to get out there and enjoy yourself or anyone to hold your hand apparently.