This section allows you to view all posts made by this member. Note that you can only see posts made in areas you currently have access to.

Not a whole lot of choice for the Z900RS Cafe that isn't covered in logo of some sorts.

This one from Evotech Performance looked the best.

Worth every penny of the £76 delivered. Amazingly easy to fit and looks great.

Gave it a good wash and used this item as recommended on here.

Holy shit... I have been neglecting all my other bikes. Amazing how much water it blasted out the switchgear and other nooks and crannies. Didn't need the heat turned up too much, the concentrated blast it gives it just fantastic.

Even the cats looked impressed.. 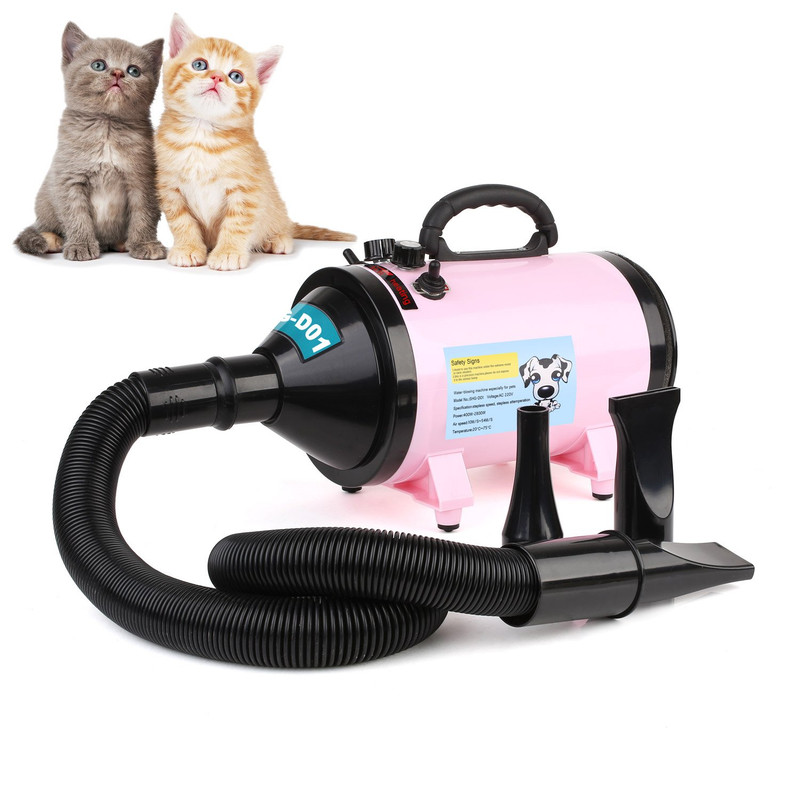 Also removed the stick out bobbin style bungy hook points at mid section of the seat.

Along with removing the big back end , fitting the tail tidy and putting new Lextek headers on.

I'm pretty much done with what i had intended when i bought it. Happy chappy with the clean look.

This is day i bought it. 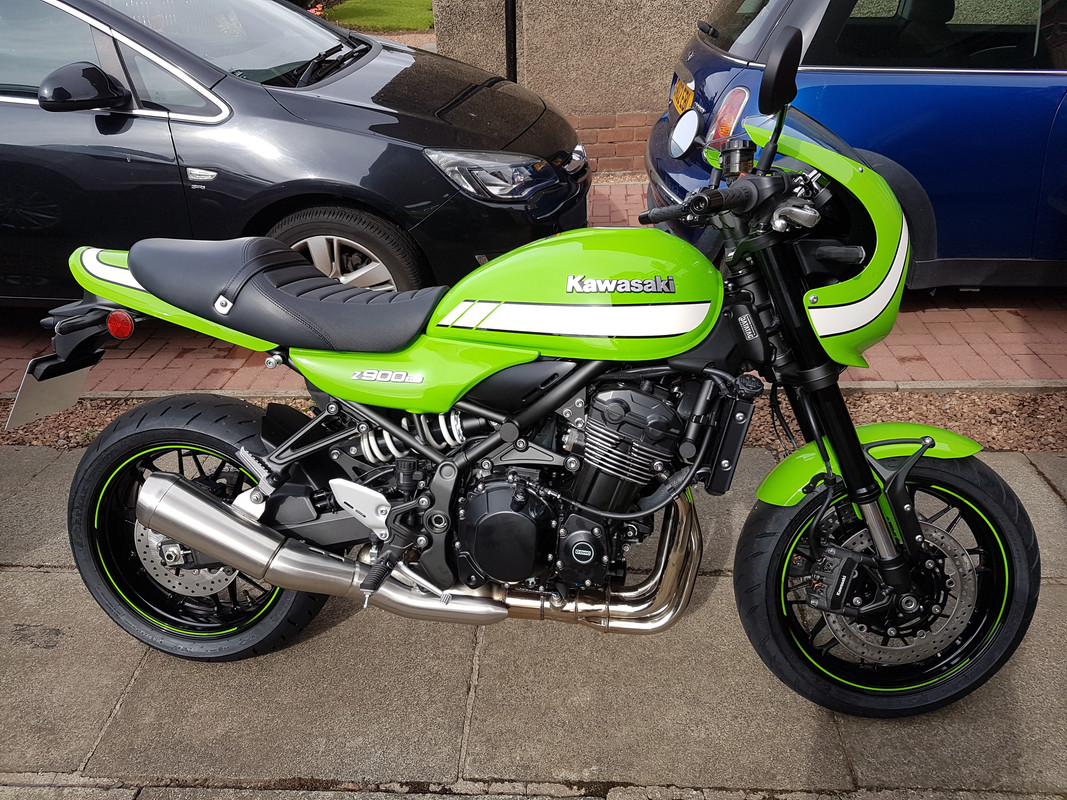 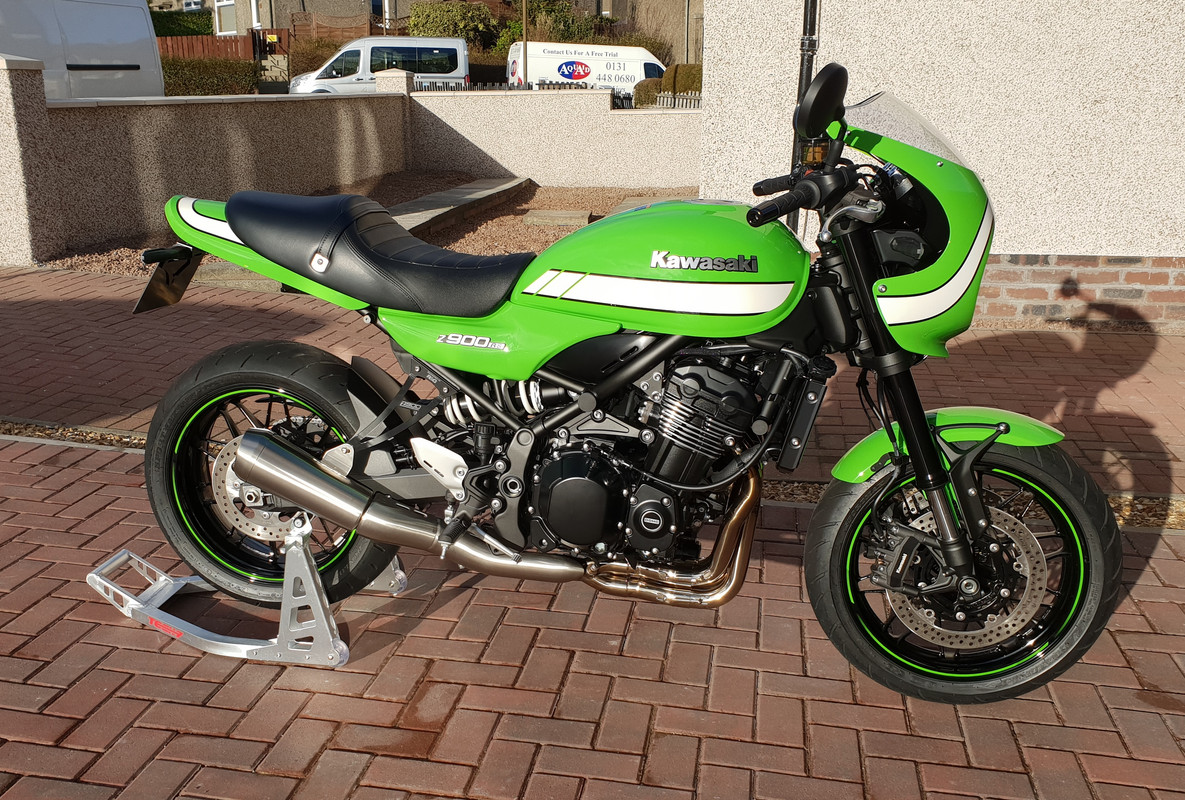 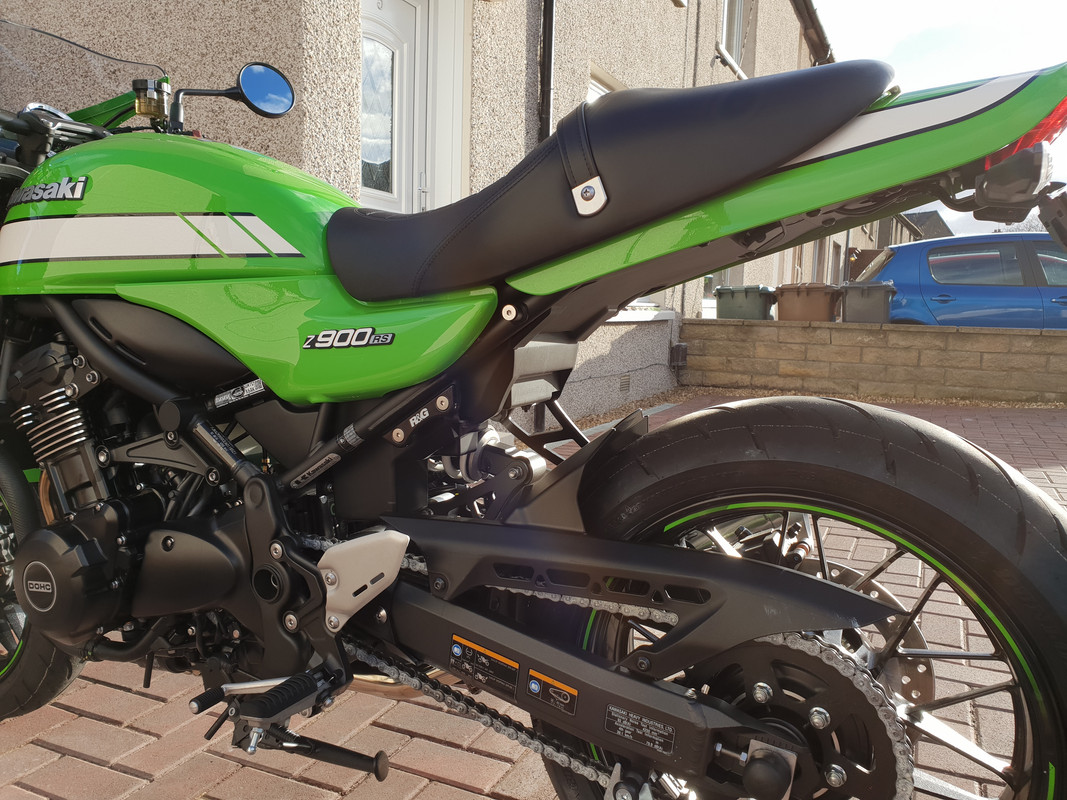 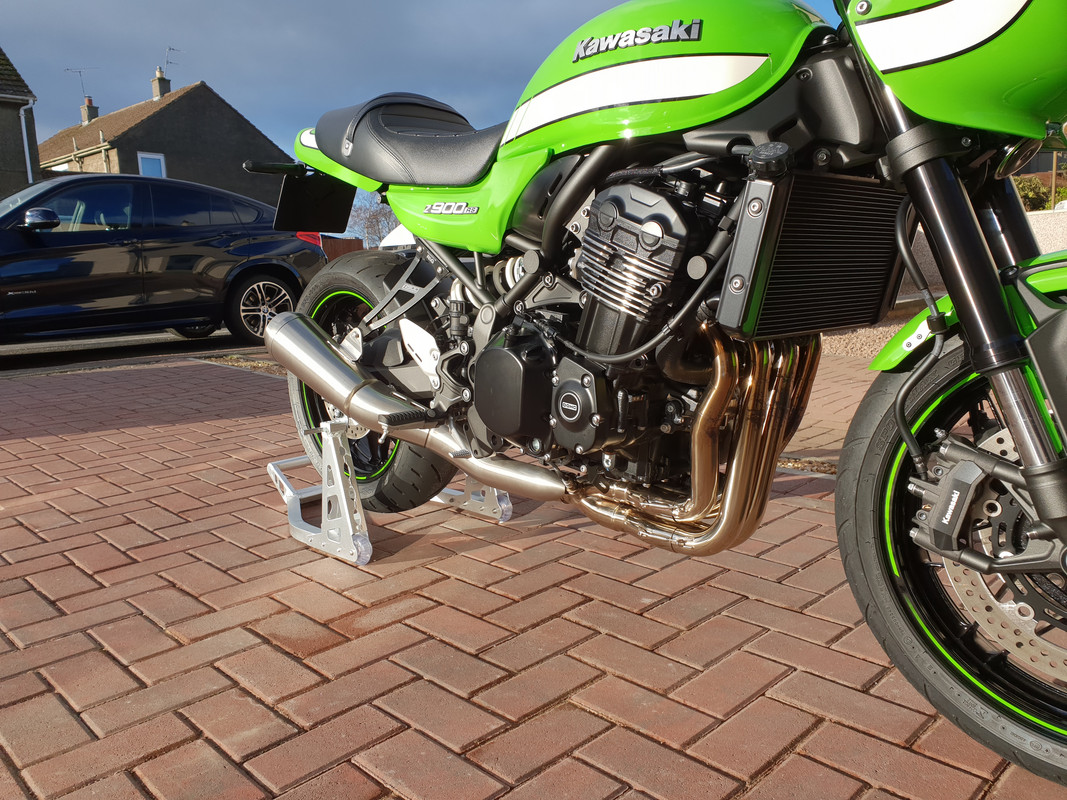 I paid the extra for multiple checks so have a few to spare.

If anyone needs a check done on a prospective purchase , please let me know and i will use the ones i have and save you a few poonds.
5

I was bright eyed and bushy tailed today

Took Zed out for a burl. Few dry roads but loads of micro climates.

I have noticed that the snatchy throttle response from standard on lower revs has gone. Lots better in 1st and 2nd.

Still not using full rev range as not had first service yet. Pulls very well in 5th and 6th from low speed. 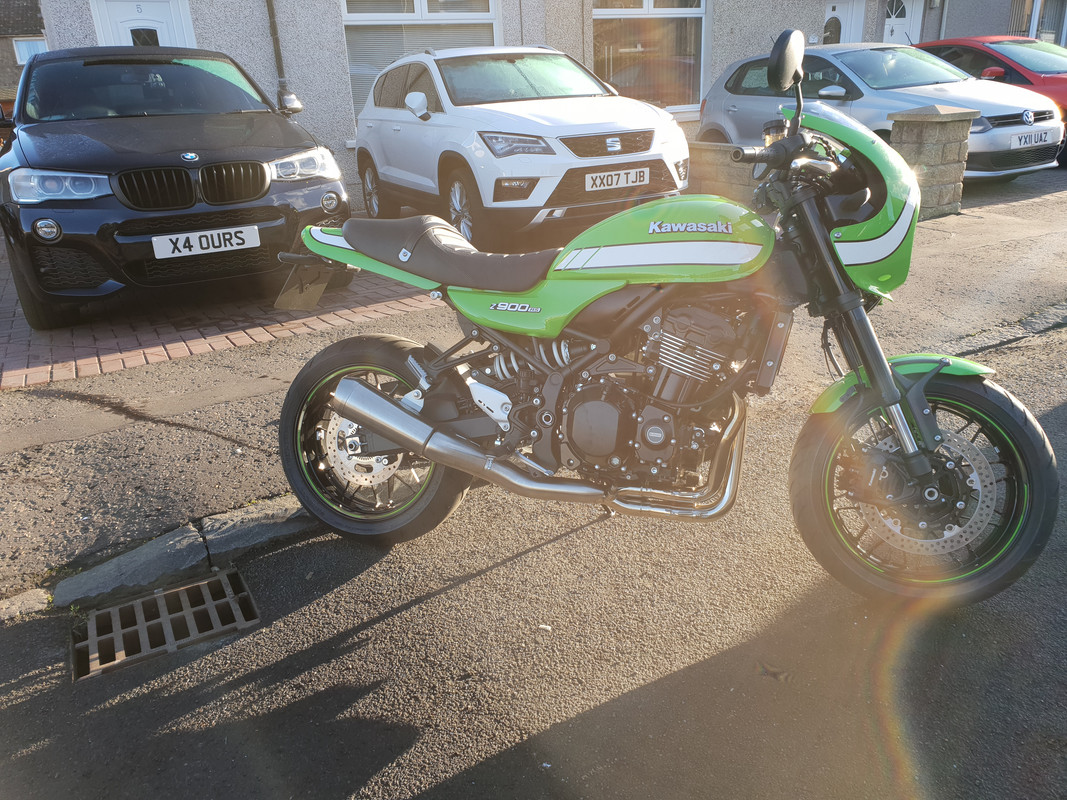 My choice was to keep the original indicators and get rid of the big back end.

Put on my plate, wider one ordered rather than cut the bracket. 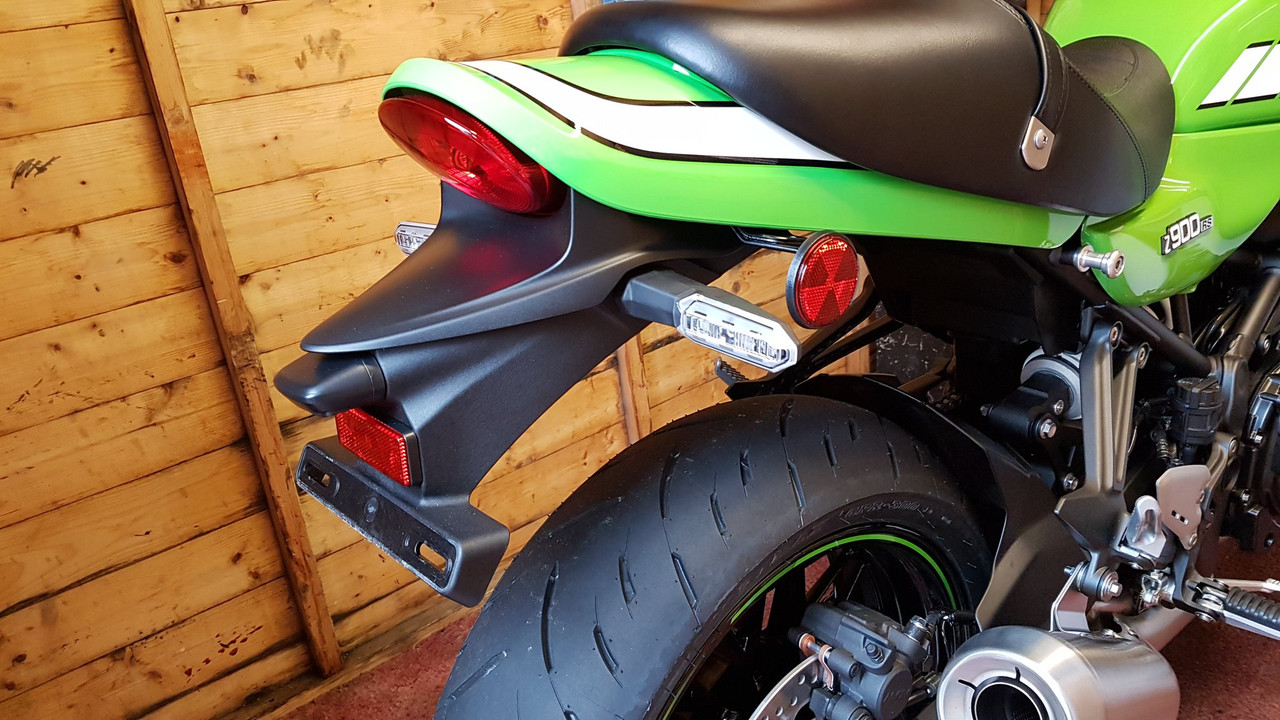 Something in me felt uneasy cutting original bike wires to connect new one. 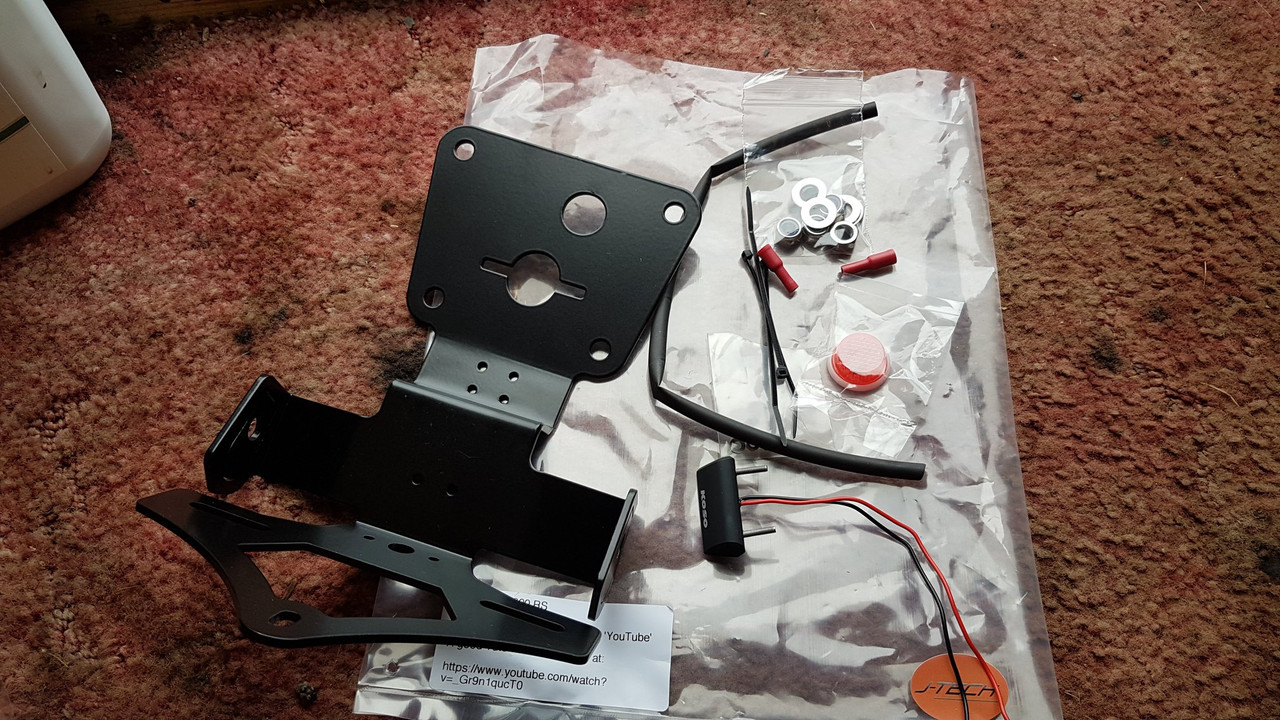 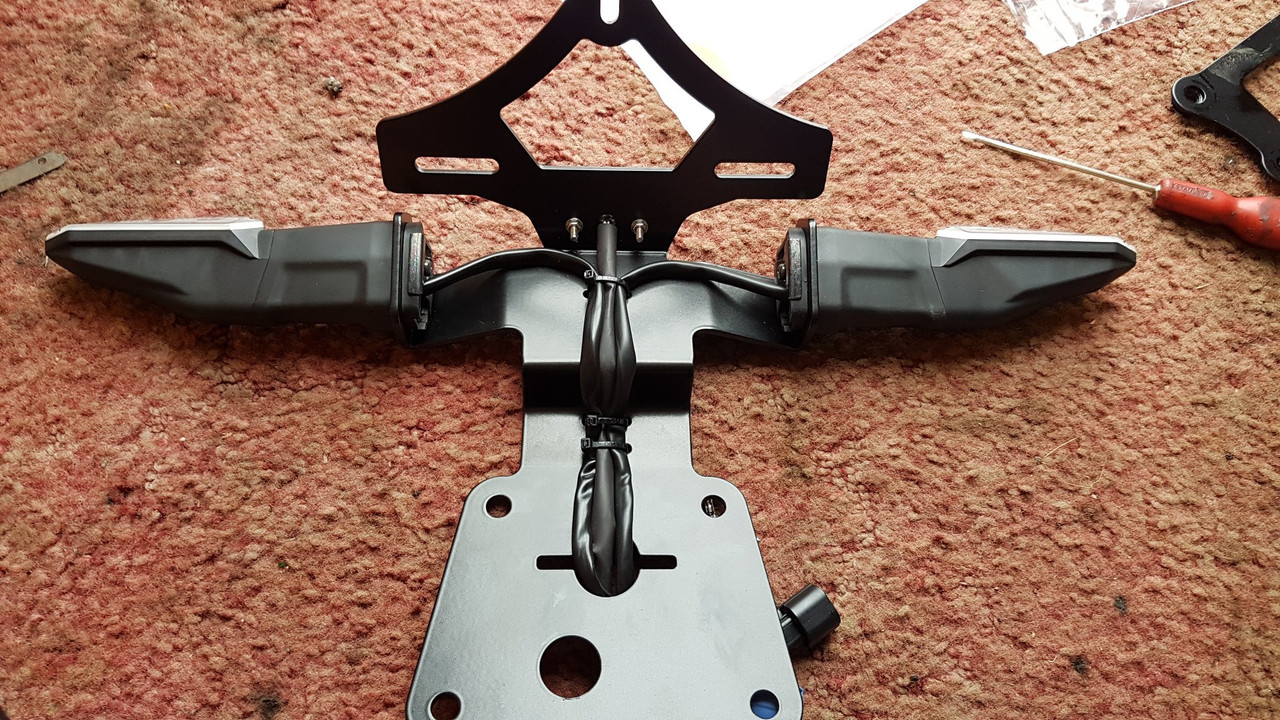 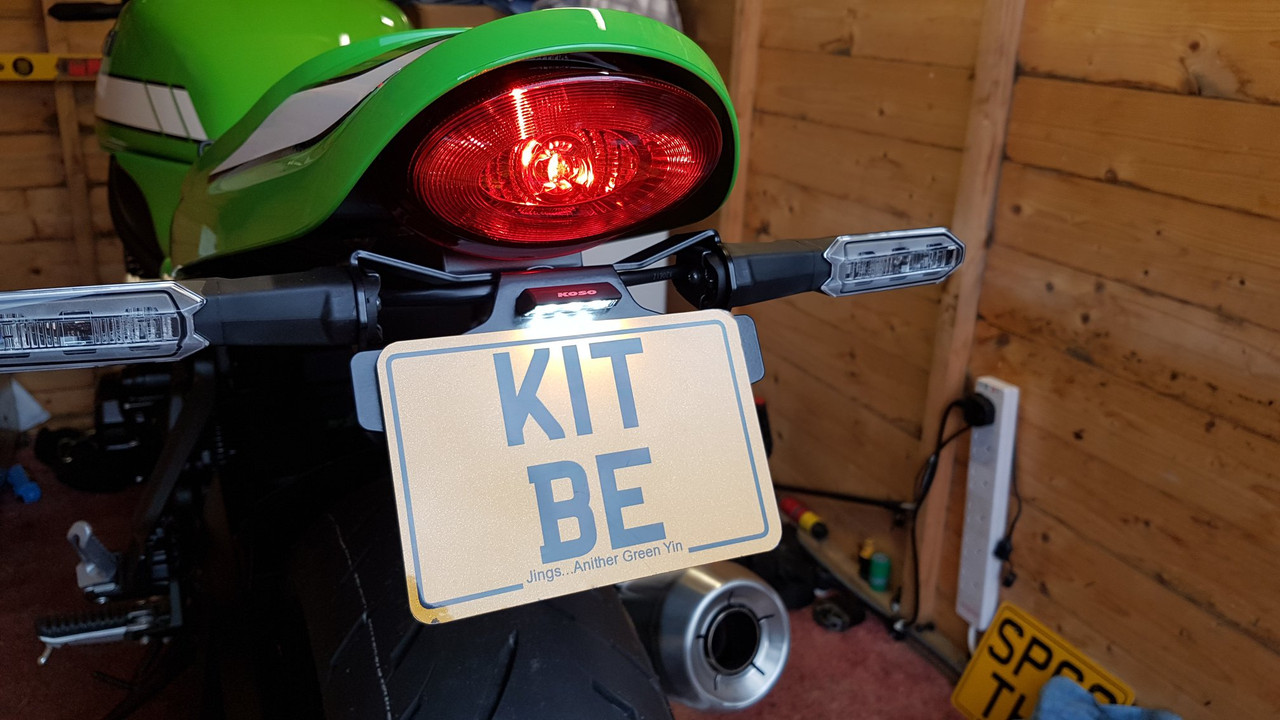 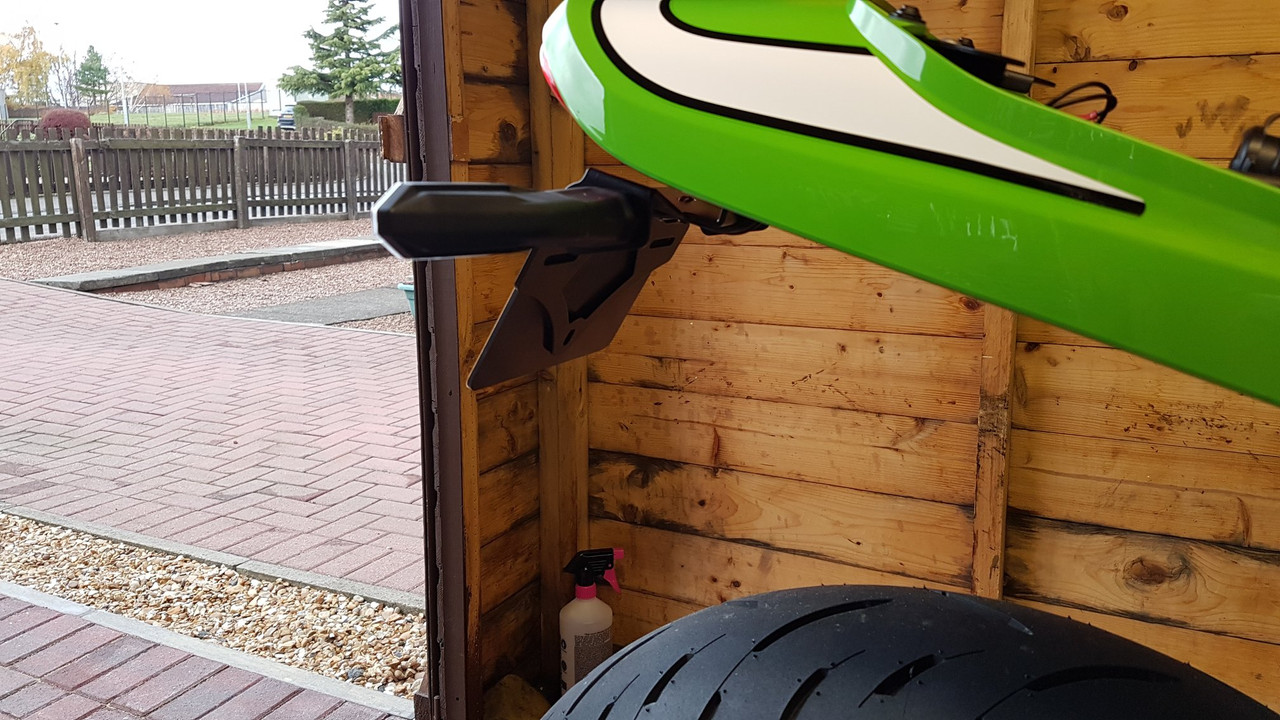 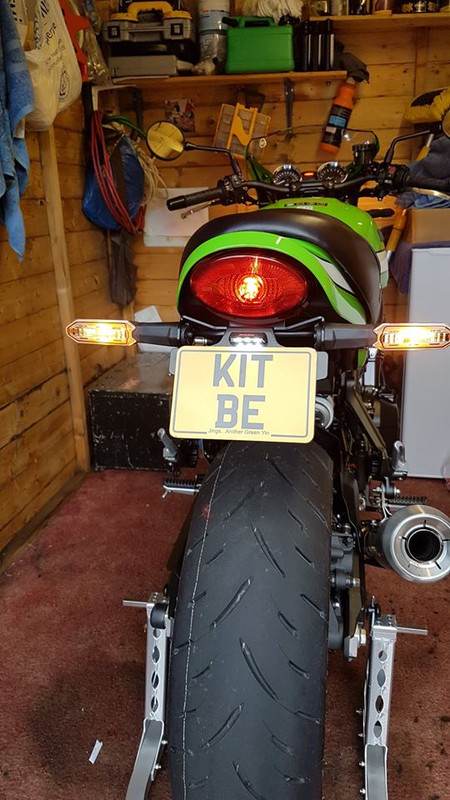 Bike Talk / Out for a burl on Zed

October 15, 2018, 04:57:38 PM
I'm liking this retired shit. Wee 12 mile cycle on trainer early this morning. Into car and away for a swim, sauna and steam room.
Pop into shops for some food supplies on way home. Get washing out on the line.
Then out on Zed.

I adjusted the bars down a bit, made a difference in my comfort, bit more of a racing feel. Done 85 miles without stopping to stretch ma pins , bike is super comfy and most enjoyable to ride. It has only doen 200 miles now so not opened it up as such.

I must say that the new BKS Fury leather bottoms i got last week are super comfy. Fit is great and no tight crunchy spots around hips or knees. Worth the dosh. 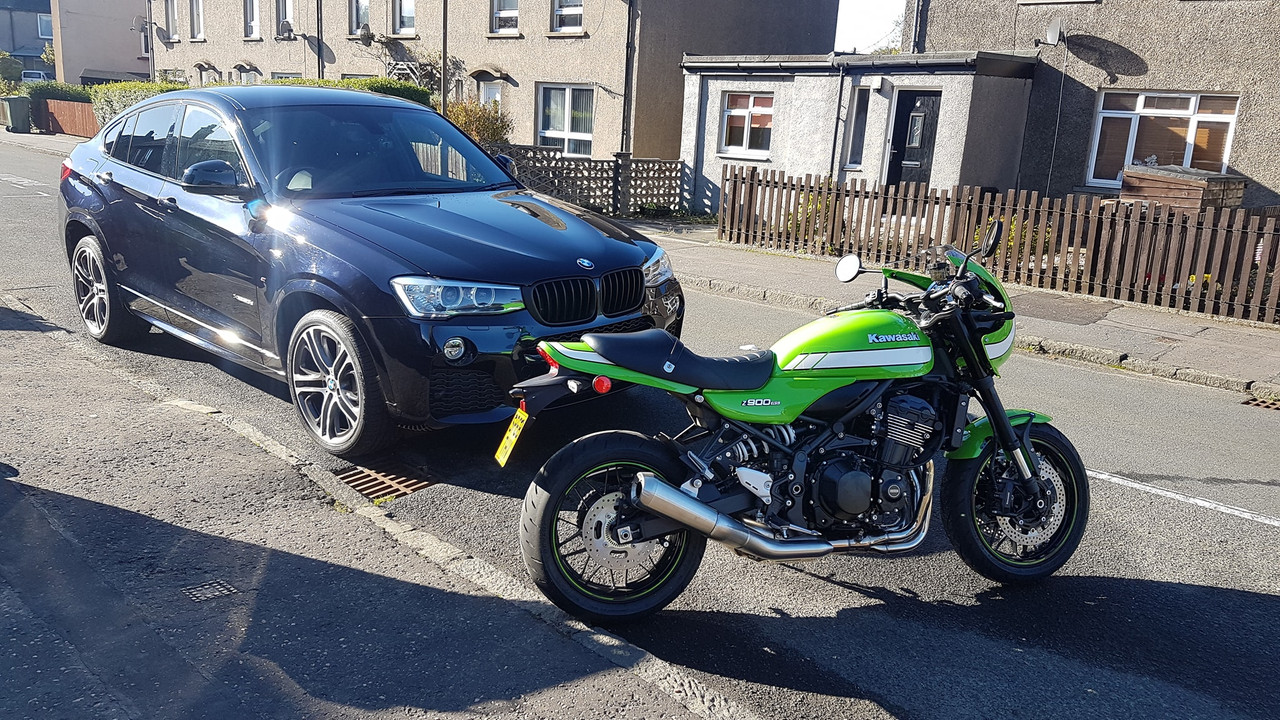 I love it, sooo comfortable and looks just gorgeous. 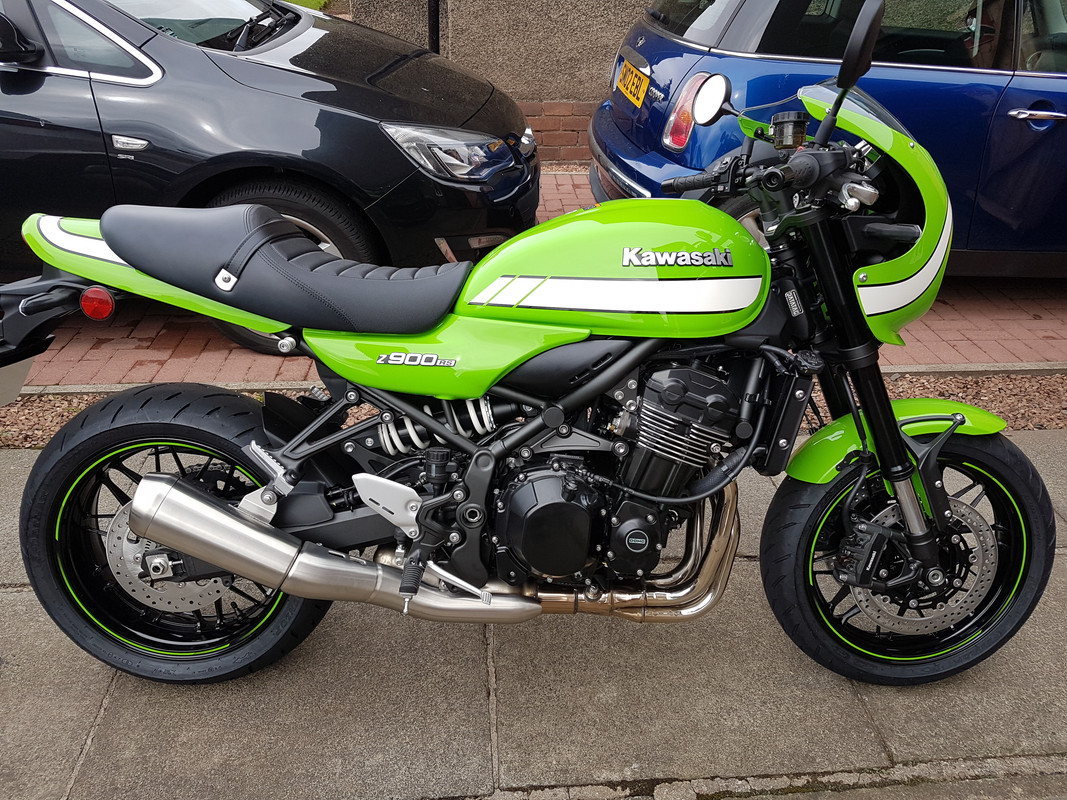 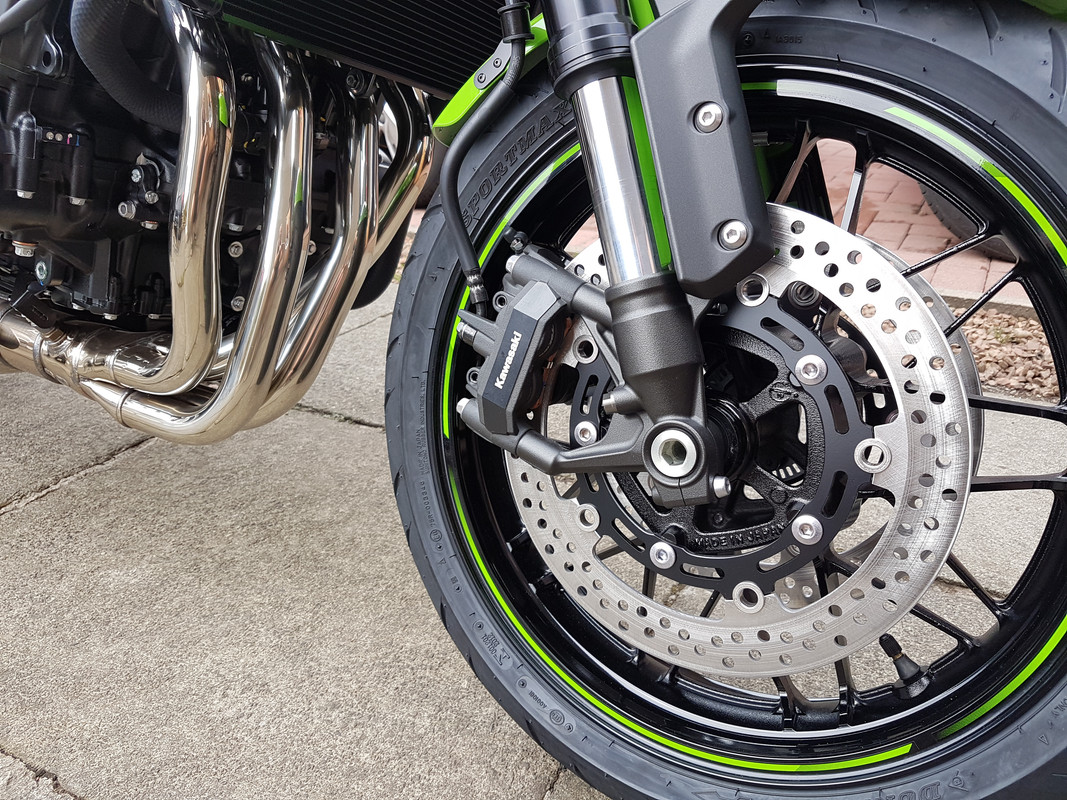 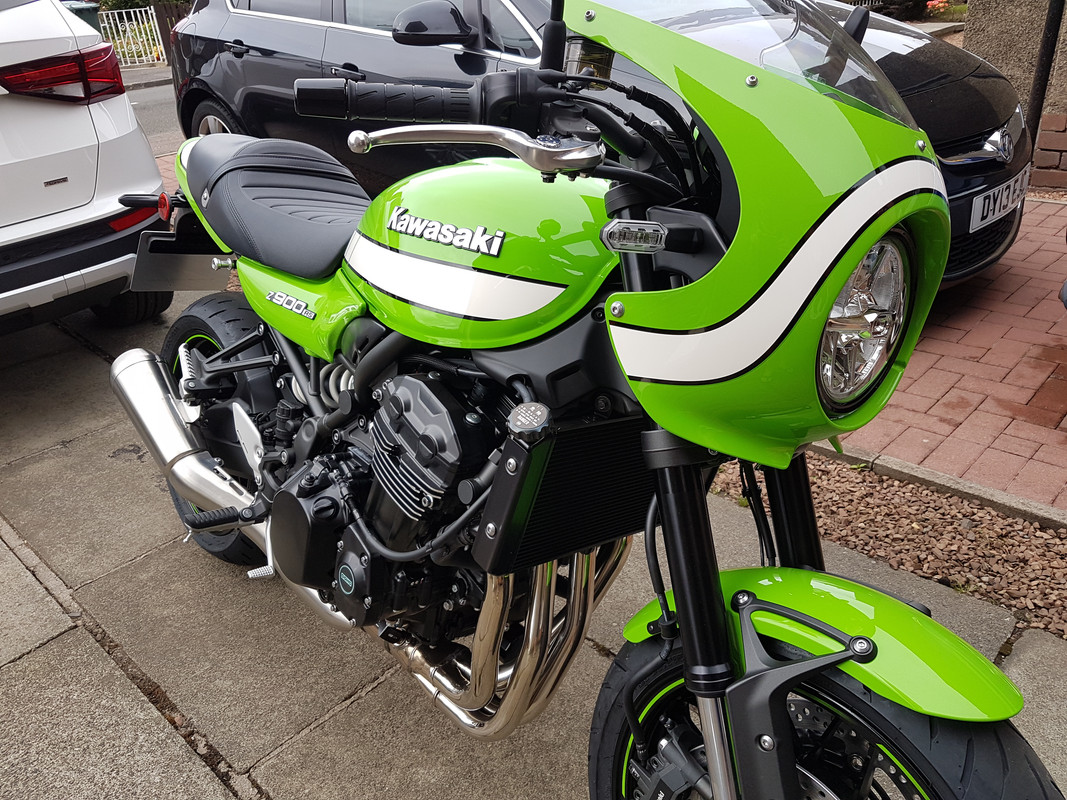 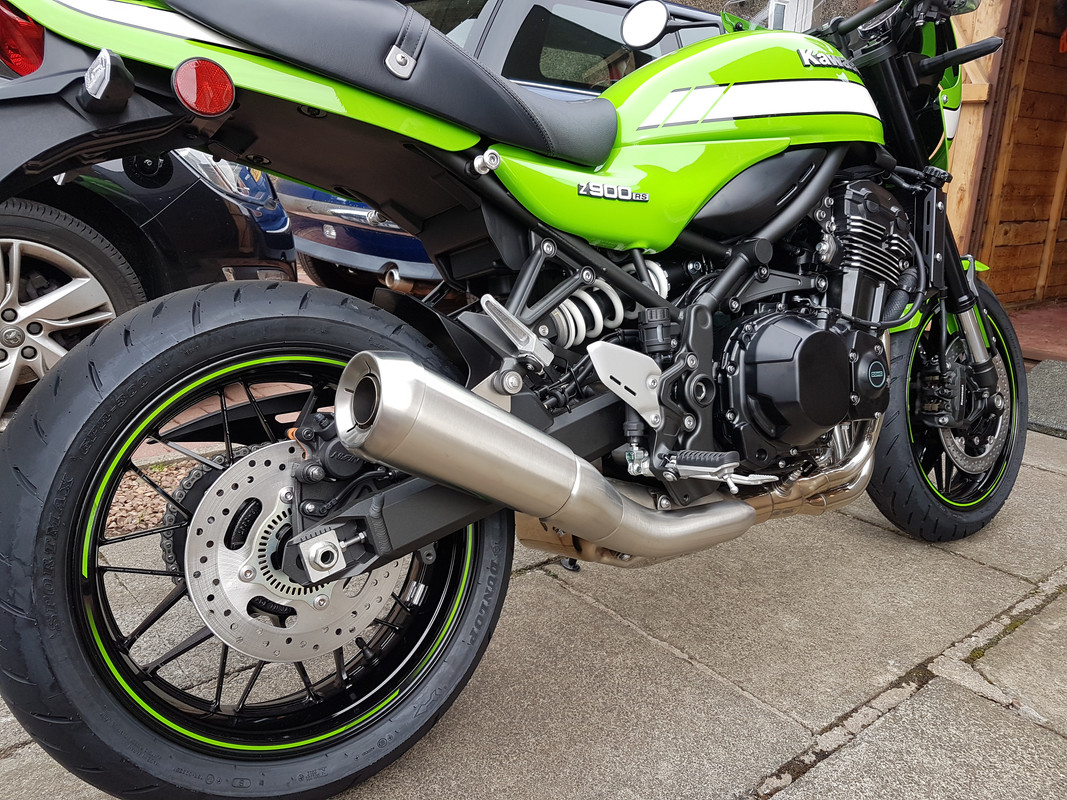 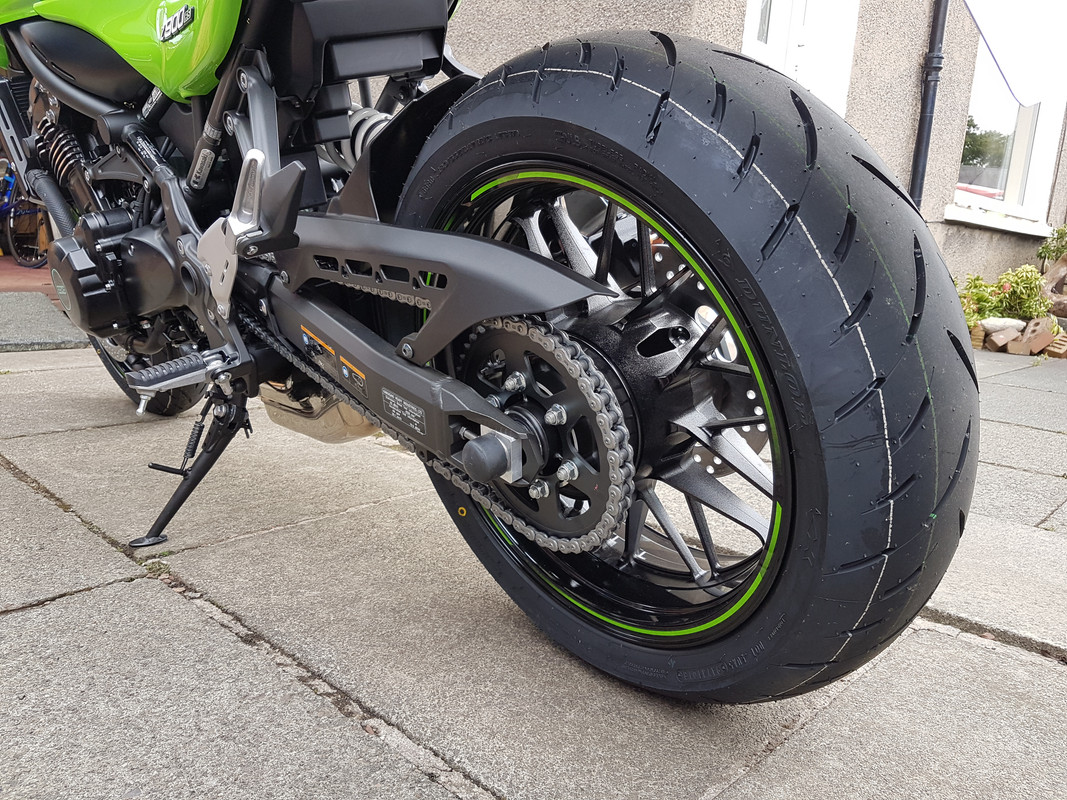 It was used in all weathers , snow , monsoon like conditions and a near hurricane which was amusing to say the least , when no other bike was on the road.

The Black Bullet has departed this locus.

Chap drove through from the other side of the Weedge for it. Helensburgh for those in the know. 3 hour round trip.

I Paid a grand for it. Took £550 as it needed new forks and regardless of ACF50. The swingarm and exhaust suffered with rust.

Onwards and upwards. Bike hut is getting gutted and new carpet fitted, courtesy of a neigbours offcuts of £30 sq meter. Lush as fuck for the new Zed 900

He was uber impressed with the service history....

And i did adjust the chain before it went in the van ... 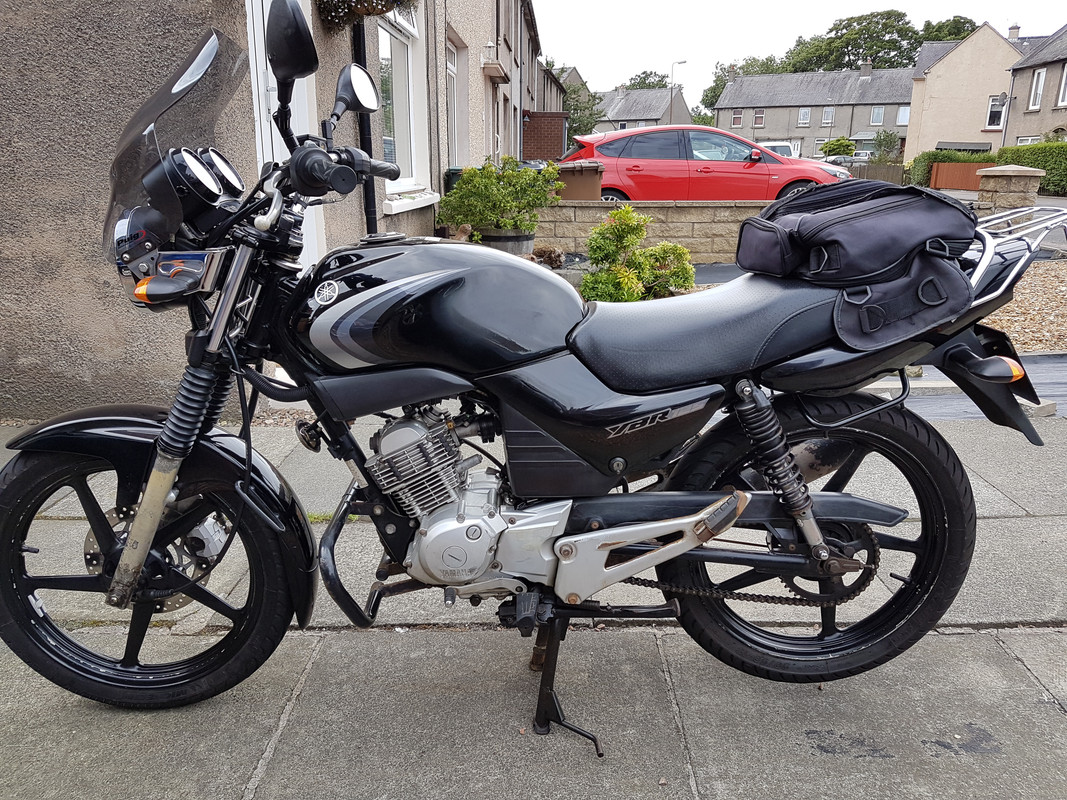 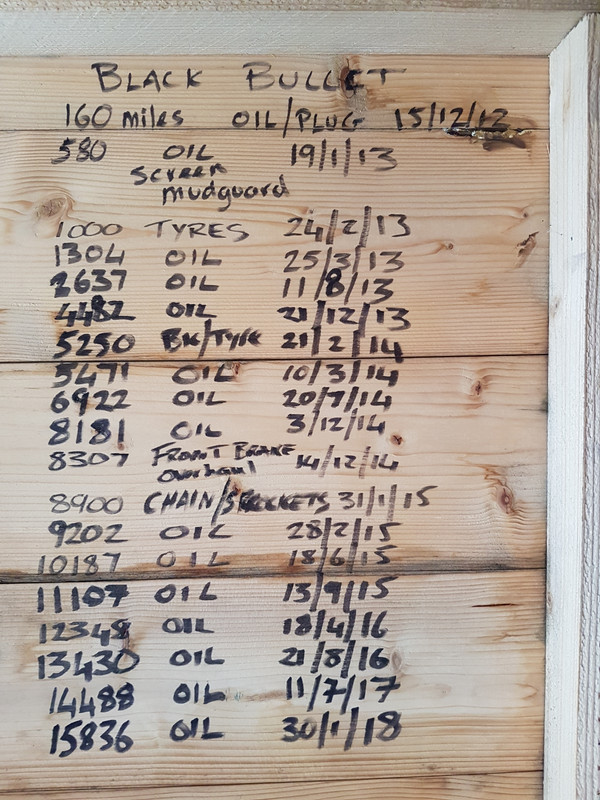 Bike Talk / I have found it.

Within 5 minutes it was like being with a long lost friend.

Comfortable , great sound , handled just right for me. Felt relaxed on it , riding position was good and i never felt like i had been away from a big bike for 3 years..

Though i did on Thruxton last week

Torque was fantastic in any gear. Not the same as the Thruxton twin oomph. Smoother and not so abrupt so to speak. Easy to ride through town and at some 20mph limits.

Once out on the open road. Yeee fucking haaaa .

The pick up in 2nd and 3rd gear is brilliant.

Went into corners with confidence and grunted out them . Made me laugh like a daftie on Helium. Brakes felt good and inspired confidence in my meagre ability.

It felt so different to Thruxton doing several laps of some various sized roundabouts. Maybe the throttle response and power.

I even had a wee rain shower thrown in on back roads. Never backed it off and felt just right.

The search for my next bike is complete.

I will be getting one by end of September i reckon.

Bike Talk / Demo on this

I took this out today for a wee run from Edinburgh down the A7.

Colour and nose fairing aint my bag. Will be a black 1200R . Maybe.

Fook me. Torque is amazing. It just pulls in every gear.

Ok. Been 4cyl chap all my days for big bikes. Had a shot on an SP2 over 12 years ago for about 15 minutes. Shat ma pants to be fair.

This is what i found myself on today.

Quite snatchy in traffic out of town. Maybe just me adjusting.

Once out on open road . This thing is crackers. Sound is awesome with Vance and Hines on it.  Found it very comfortable once i adjusted myself and kept relaxing as i was aware that i was tensing up having been away from big bike status for so long.

To be honest i was a tad shitting ma pants.

I needn't have worried. It hit 3 figures in a very quick shortshift. Slowed down and tried to see how good it pulled from low down in each gear. Well impressed.

Tried the brakes from a reasonable speed 3 figures.. . and one finger braking. Stops so very fast.

After riding the 125 so often. It felt very heavy on roundabouts, wasn't surprised. At 200KG plus , and my lack of biig bike feel and confidence.

Downside. Sidestand is hidden under exhaust and the boots i was wearing ( old Alpinestars ) gave no movement to get it , had to flick it out by hand. OOOOH ERRR

Heat from engine once back into town was a bit annoying on inside of knees.. Tho i tend to hug a bike with my legs. Ended up with them out to cool down in Edinburghs glorious 20mph limits.

So. My morning was good. Will i buy one ? Probably, second hand and most certainly not from Two Wheels in Edinburgh. 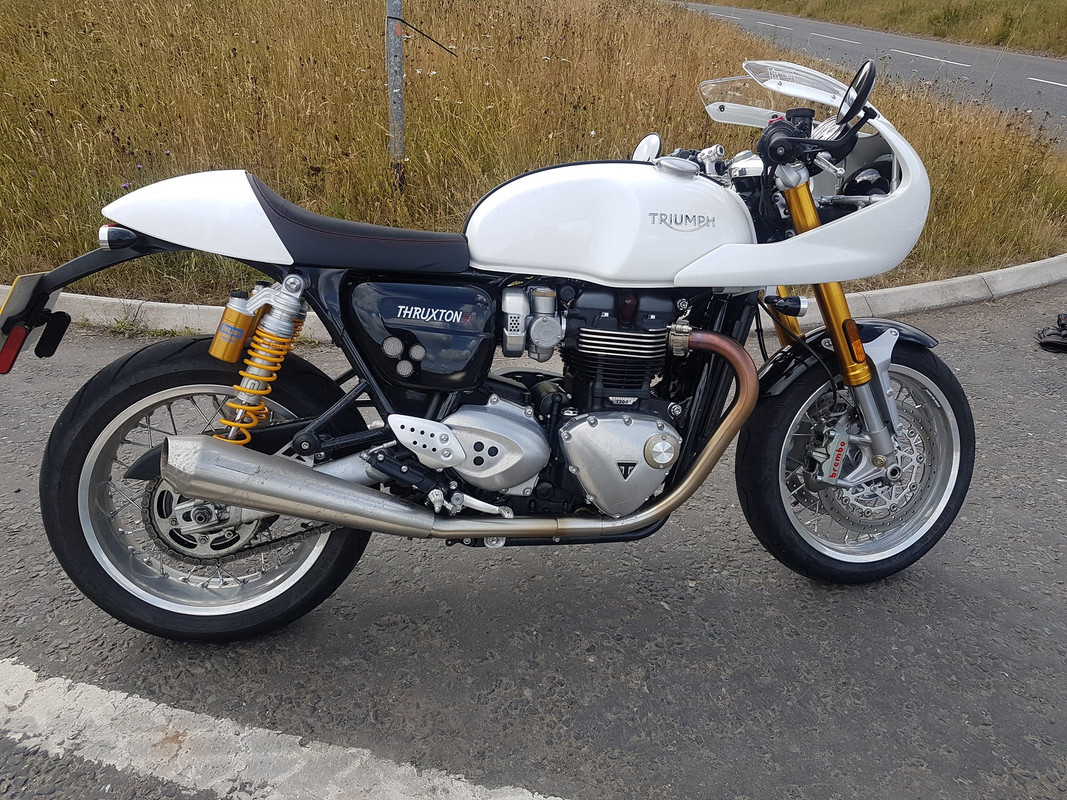 There are rapists and other bad fuckers that commit terrible crimes who do not get jailed.

I personally do not think that jailtime at the taxpayers expense is the correct punishment.

November 09, 2013, 06:53:02 PM
Out early doors this morning.
Total degrease of the YBR with Gunk and some brushes.
Rinse then wash with shampoo.
Rub down with old bath towels. Let it dry in the sun and breeze.

ACF with brushes and rags, not as heavy handed with it this year.

Bike is now ready to go for the season of salt.
Read on another forum that folk pay about £60 for this to be done.

Took me about 2 hours to do it.

Should maybe advertise my services

For the bike as well

Gators have been fitted.
Not gonna do the heated grips due to battery issues. Think I might get a set of Muffs....

Parts For Sale / ZX7R rear side panels for sale

Will do someone a turn.

Offers about £40 for the pair.

Will not sell separately.

,  due to the battery not being in the phone. Which I fucking declared.
By which time the buyer had got a refund and bought another.....

Slight marking to case as can be seen in photo. Otherwise it is in brilliant condition.

Quite well used as you'd expect from a phone used by a 13 year old lad.

The phone is under a year old, always had a case and screen protector on it.

Will be supplied with 4 fresh screen protectors that I have.

Comes with a 2GB SD card.

Works as it should.

For clarification . It is ON TESCO MOBILE.

Do not ask if it's unlocked and open to other networks.

IT IS LOCKED TO TESCO MOBILE

It is so easy to ride , comfy on my dodgy arm , handles great , could do with braided hoses , just made me grin with the fun of it.

Helllooooooo sexy silver. Welcome to the family and the land of great roads. Look forward to getting out and about on you.

Will get the stickers off and polish out. Soon be up to my standard of cleanliness.

Enroute to Wigan , Sunday morning for a straight swap to a Z750. Got 90 miles to Lockerbie services for a quick coffee.
The straps were all tight 60 seconds before.Paddock stand sank into the shitty thin ply floor.

Could've been a whole lot worse if the front end wasn't wrapped up in a big thick duvet. Expensive lesson learned.

21 years and 11 bikes. First time I have had any damage to repair.